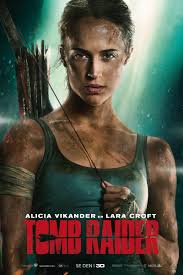 “All myths are foundations of reality.” ~ Richard Croft

“Lara, your father’s gone. You can pick up where he left off.” ~ Ana

“Seven years, I’ve been on this island. Your father, he put me here. Now I see the likeness, intelligence, the recklessness.” ~ Mathias Vogel

“Some men like dangerous women.” ~ Lu Ren
“Some men are foolish.” ~ Lara Croft 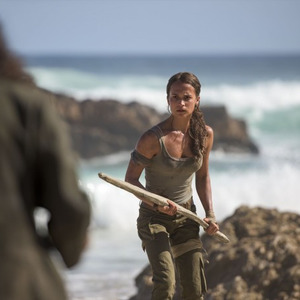 It’s been years since we last saw Lara Croft on the big screen, in Angelina Jolie’s pair of Tomb Raider adaptations. Based on a video game (not a good source material, but then I’m biased against video games) following a cold as ice British archaeologist-adventurer (pretty much a female Indiana Jones), the two previous films followed Jolie’s character as she confronted family issues, ancient secrets and grandiose treasures, deathtraps, megalomaniacs, and betrayals. A new take on the character takes to the screen in the simply titled Tomb Raider.

We meet Lara Croft (Alicia Vikander), at twenty one living a reckless, carefree sort of life. She’s going through school, working as a bike courier to pay the rent (this despite coming from wealth). And she’s avoiding the inheritance of her father Richard (Dominic West), a wealthy adventurer who vanished without a trace years earlier and is considered dead. His business partner Ana (Kristin Scott Thomas) coaxes her into taking responsibility for her inheritance, and thus Lara comes across a message from her father meant for her, the one of the 'if you're seeing this I'm dead' variety- one that will lead her to a dark legend of the past, a scenery chewing villain, a tomb filled with complicated dangers, and situations that nobody should logically be able to survive.

The last of these films was back in 2003, when Cradle Of Life wasn’t quite the success that the first film had been, and Angelina Jolie decided not to reprise the part. Her take on the character was of a woman already established in her profession on the one hand, and enjoying the wealth of inheritance on the other (all while having daddy issues herself). The story here takes the character and has us see her as a novice, not yet finished her education and living away from the family mantle of responsibility when we first meet her. The script, by Geneva Robertson-Dworet and Alistair Siddons, follows a story the former did with Evan Daugherty, and follows the formula of the franchise- both film and video game. The cool and steady heroine, the ancient secret of incredible power, the ethically challenged villains with visions of profits in their heads, the action set pieces of near death escapes- they’re all present and accounted for.

Given the fantastic elements of the story, the strongest touch of the script is the dynamic of daughter and father- the absence of the two, the mourning of a bond that’s been lost and yet found. As preposterous as the ancient secret turned incredible power aspect of the story might be, that dynamic between the two Crofts is the highlight in a script that otherwise tends to relies heavily on cliches, plot holes, and the avoidance of logic. I mean seriously, how on earth does someone survive all that, let alone seem to heal so quickly and be back in action? 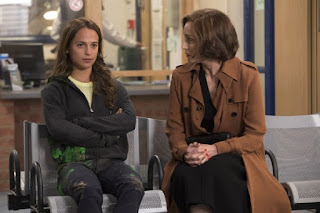 The director is Norwegian- Roar Uthaug. His work has been based out of his home country, though looking at his resume, his last film makes for good qualifications for taking on the job here. The Wave was a 2015 disaster film that was strongly grounded in character, and that reflects itself here. He’s able to handle the CGI that the story presents on the one hand, the grand set pieces and fierce action, all while working reasonably well with the actors themselves. Uthaug as a director deserves better than the script gives him. Have I mentioned I'm not impressed with the screenwriters? 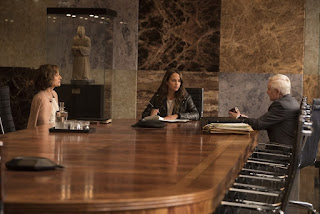 Some of the supporting characters tend to be more sketchy in their development, and that’s more a case of the problems with the writing, where emphasis is placed elsewhere. Daniel Wu plays Lu Ren, a ship captain who assists Lara (and somehow manages to survive things that he shouldn’t survive), but is generally not developed beyond that. The same applies to Hannah John-Kamen (who will soon be appearing as a Marvel villain) playing Sophie, Lara’s loyal friend- the script doesn’t really develop her beyond that point. Kristin Scott Thomas and the veteran actor Derek Jacobi find themselves in the same dilemma, with character roles that aren’t as developed as they could be, for a couple of reasons- the story needs their cards played close to the vest and the story puts its emphasis on the leading character.

Walton Goggins plays the villain, Matthias Vogel. He’s made his name in the television show Justified, but has worked as a character actor in film and television for years on end. Possessed of a strange name and the sort of beady eyed looks that will never make him a leading man, Goggins instead gets to play character roles and oddities. Vogel spends a lot of time chewing the scenery on behalf of a shadowy organization (there’s always a shadowy organization in a film like this). A rival archaeologist to Lara’s father, the man is a greedy bastard, totally without scruples of any kind, seeking power for his own ends and that of those he answers to. The actor seems to be having fun playing the role, but then playing the villain usually is more fun.

The bulk of character development in the film is left to two characters. Dominic West, the British actor, has done a lot of film and television work on both sides of the Atlantic for more than a quarter century, and here he plays Lord Richard Croft, the nobleman turned archaeologist and adventurer who at the beginning of the story has been presumed dead for some time. Unlike Vogel, he is a man of scruples, sympathetic, devoted to the daughter who he’s missed terribly, and the actor plays to that, creating a believable relationship with Vikander in how the two relate to each other- even when they’re not in the same space. 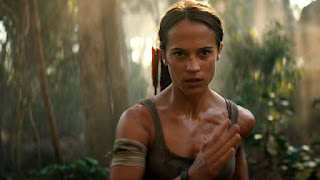 Alicia Vikander gets the rest of the character development as Lara, and she occupies the role well, ending up being the best part of the film. She’s done quite a bit as an actress since her career started, most recently as a primary role in Jason Bourne. Her take on the character starts off as carefree and cool (while avoiding the unresolved issues of her father’s disappearance), something of a novice starting out into a world of adventure. As the story goes along, she invests the character with strength, physicality, sympathy, and a smooth, sly sense of humour. Cool as ice as she may be, her take on Lara is human, and is what makes the film work, and gives the audience someone to connect with. She may be able to survive and heal faster than anyone should be able to (is she related to Wolverine?), but Vikander’s performance gives the character more depth than a video game could have.

All in all, the film manages to entertain despite a weak script that leans too much into spectacle and into cliche at times. Yes, some characters tend to be more one dimensional than others. Yes, there are plot holes and preposterous moments. Yes, there are one too many booby traps that play to the video game origins. But the leading character is compelling to watch, and the actress makes her that way. There will no doubt be more of Tomb Raider to come, and I’d like to see what Vikander does with Lara Croft. As long as they hire different writers. 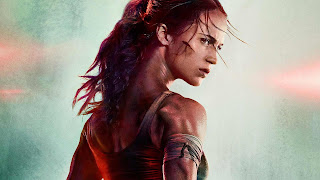