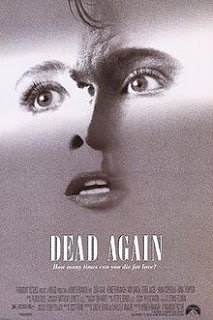 “The man I bought it from explained to me that when a man gives it to his wife, they become two halves of the same person. Nothing can separate them... not even death.” ~ Roman Strauss

“Oh, and you don’t have to worry about forgetting her name. She’s already forgotten it for you.” ~ Pete

“This is fate we’re talking about, and if fate works at all, it works because people think that this time, it isn’t going to happen.” ~ Madson

“Grace? That’s what the teabag says? That my name is Grace?” ~ Grace 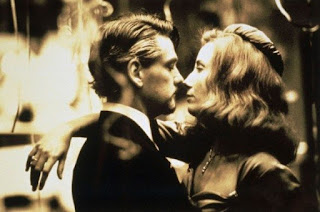 Dead Again is an unlikely mix of genres, bringing together elements of romantic fantasy and the supernatural with a good deal of film noir influences in this 1991 film from director Kenneth Branagh. The director stars in dual roles opposite his then wife Emma Thompson, who was also playing a dual role in a story that combines the mystery of an amnesiac woman with the notion of connections to past lives. With a good supporting cast, the film is quite entertaining, romantic, thrilling at times, stylish, and clever. 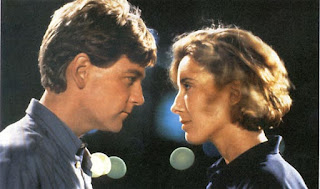 The film opens with newspaper headlines through the opening titles, detailing the 1949 murder of Margaret Strauss (Thompson), a classical musician stabbed during a robbery at her home. Her composer and conductor husband Roman (Branagh) is arrested and put on trial in the months that follow. Found guilty, he is sentenced to be executed. Before his execution, he is visited by a reporter, Gray Baker (Andy Garcia), who was acquainted with the couple. 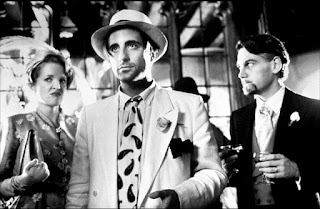 Forty years later, an amnesiac woman (Thompson) has turned up at an orphanage, unable to speak, and plagued by nightmares. The priest who runs the place calls in a private detective who grew up in the orphanage, Mike Church (Branagh) to determine who she is. Church asks his friend Pete (Wayne Knight) to publish her photo in the newspaper to see if her family is looking for her. An antique dealer, Madson, with a sideline in hypnosis, approaches Church with an offer to help, and the first session determines that she can in fact speak- and is able to relive in third person the story of Roman and Margaret. It seems the tragedies of the past are coming back into the present through past lives. 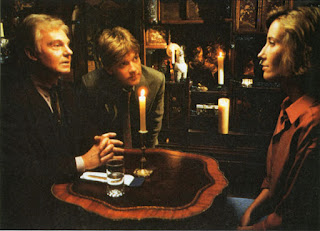 The story is by Scott Frank, whose other work includes Get Shorty, Out Of Sight, Heaven’s Prisoners, The Wolverine, and Logan. The story weaves back and forth between past and present, primarily acting as a mystery, with elements of the familiar private eye genre as a strong influence. The cynical detective, the mysterious woman, the oddball characters, these are all aspects that nod back to the Forties era of hard boiled private eyes in cinema, as does the somewhat dark sense of humour throughout the film. And the narrative weaves in a love story (two, actually) and more to the point the unusual premise of past lives influences the current day, particularly in the sense of the inevitability of fate. 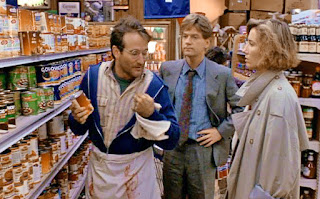 Branagh was already well established as a Shakespearean actor and director on stage and screen at this point- his masterpiece adaptation of Henry V was two years behind him when he directed this film. It has a theatrical quality in its pacing, fitting Roman’s character, since the man is a composer of dramatic opera. The theatrical quality carries over in the rest of the film, as the mystery unfolds, and particularly in the climactic aspects of the film, and Branagh’s directing style plays to that. I particularly like the use of black and white for those scenes set in the past (which mostly unfold in flashback through hypnosis) and colour for the present day sequences, as well as how he uses several scenes that are extended single take scenes. 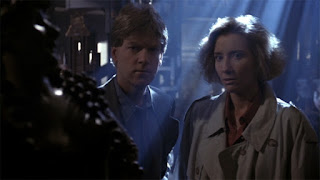 The production values are particularly effective in the past sequences, with a palatial residence well outfitted to look like a place out of the 1940s, or a masquerade party at the time looking quite at home in the past. And one of the prevailing visual themes- scissors- are carried over into the present in a creative way. Branagh uses some actors to play smaller parts in both past and present, including his frequent music collaborator Patrick Doyle, whose score for this film mixes together romantic, mysterious, and highly theatrical themes along the way. 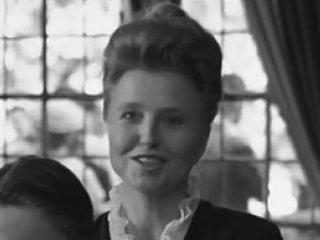 The cast are exceptional in their roles. Hanna Schygulla appears mostly in flashbacks as the Strauss housekeeper Inga, who escaped from Germany with Roman and her son during the darkest days of the Second World War and has been loyal ever since. She has to play the character with a certain degree of distance as the film goes along- the audience isn't meant to get inside her head. 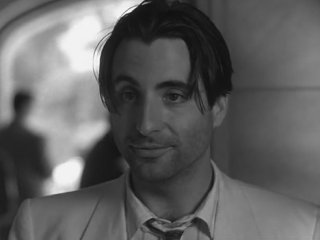 Another character who spans both past and present is Gray Baker, played by Andy Garcia. When we first meet him, he’s a young reporter with a cynical world view, fondness for smoking, and a womanizing attitude. This carries over into his interactions with Margaret and Roman, as he doesn’t show much respect at all for boundaries. Garcia makes him thoroughly jaded in his performance, and when we see him in the present day, he’s a wreck of a man, ruined by smoking, but still as jaded as ever. His present day appearance could be said to be the best cinematic argument against smoking. 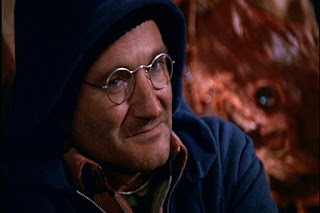 Robin Williams gets a cameo appearance as Cozy Carlisle. Where Baker is jaded, Carlisle is bitter and acerbic in a way that makes the reporter seem happy. A disgraced therapist who comes into the plot as the subject of a routine search by Church early on, he’s a man with little in the way of scruples, no ethics, unconventional ideas, and the source of much of the dark humour of the film’s present day sequences. Williams gives the character a bleak, serious air in the way he plays it- Carlisle’s not a pleasant person, nor does he pretend to be. 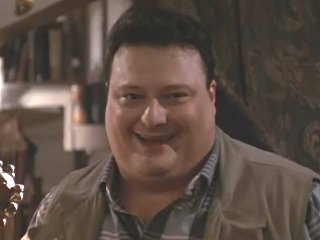 Wayne Knight is best known for a couple of roles, the opportunistic hacker Dennis in Jurassic Park and as the perpetual irritant Newman in the Seinfeld series. Here he plays a very different character as Pete Dugan, the newspaper staffer who’s best friends with Church. He’s loyal and friendly, a genuinely likable guy, with an ironic sense of humour and something of a speech impediment. Knight gives the character a lot of levity as he goes along. 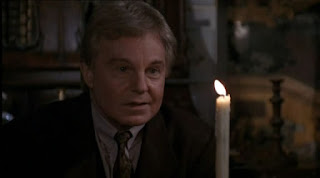 Derek Jacobi is a frequent collaborator with Branagh, having had co-starred with him in films like Henry V and Hamlet, as well as being in the cast for Branagh’s directed Cinderella. He gives the role of the antique dealer Madson a dry air. When we first meet him, he’s hypnotizing a woman at his shop for one reason, while gathering information on potential jackpots for himself. It’s a bit underhanded but amusing, the act of a grifter, but a good way to introduce a character. Madson explains his interest in past lives and how they can influence present day actions. Past life regression through hypnosis is key to unlocking the secrets of the story, and the actor plays the character with dignity but secrecy, playing things close to the vest. 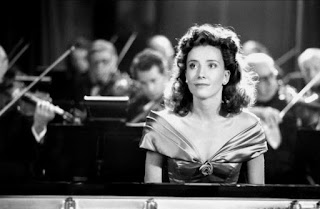 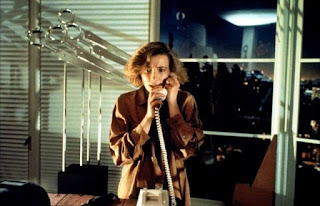 Emma Thompson gets the challenge of two roles- Margaret Strauss in the past and the woman known as Grace in the present. Her Margaret is playful but professional, quickly falling for the conductor Roman, and the bond between them becomes believable as their story unfolds. Grace is a different story- she starts out as plagued by nightmares, in a vulnerable state, not knowing who she is or what’s happening to her. And yet under that, as the story goes along, the actress gives Grace a different kind of playfulness, mixed with uncertainty as she falls for the private detective who’s trying to determine what’s happened to her. The chemistry between the actors, in both eras, works very well indeed. 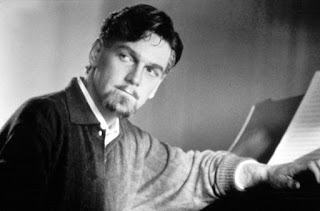 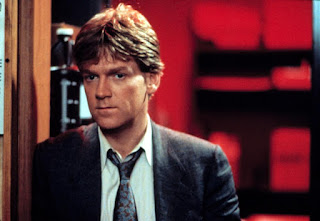 Branagh also gets to play two roles, giving Roman a certain amount of distance when we first meet him- we’re meant to wonder at his guilt. The character has his stormy, frustrated side that seems to fit in with his composer profession. Mike Church is a different character altogether, a private eye who tends to see the worst in people. He’s a cynic, but not above taking in a stray- a true cynic might be inclined to leave the amnesiac in a mental hospital, but he doesn’t, so this cynic has principles. Branagh plays the two characters in different ways, and Church, who finds the supernatural idea of past lives to be laughable at first, must come to terms with the idea of it as it becomes less implausible and fate closes in on him. 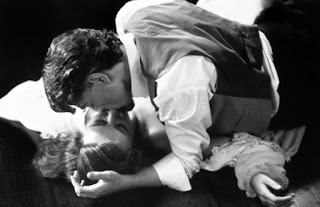 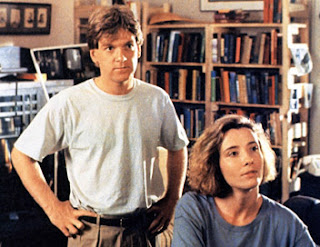 Dead Again got mostly positive reviews and box office at the time, and the film itself is stylish, moody, smart, entertaining, and dramatic, fitting the acting credentials of its leads. It’s a well paced film that skilfully goes back and forth between past and present, giving two lead actors the chance to play two roles across two lifetimes. It’s a hidden treat you might not know of personally, but it’s well worth seeing.
Posted by William Kendall at 12:00 AM