Legends Of The Game 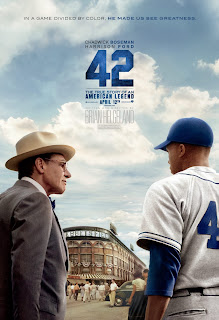 Imagine coming to a new city to play the game you know best. Imagine the hostility and distrust you get from teammates. Imagine the venom and outright hatred from the crowds in the stands. And imagine being told that you have to ignore that and not react, that it’s the only way to make things possible for others to follow in your footsteps. So it was for Jackie Robinson, the first black player to break through the colour barrier in major league baseball in 1947, signed into the Brooklyn Dodgers by executive Branch Rickey. The story has been told in film before, with Robinson playing himself. Now, going on near seven decades later, a new take on the story has arrived in theatres.
Every once in awhile, baseball finds its way into the movies, and when it’s done well, it’s an emotional powerhouse. Watch The Natural, for example, and you’re seeing this almost Messiah-like story of a player getting one more chance at glory. Kevin Costner has gone to the game on three occasions, each a success, each film different from the other. Bull Durham gives us a minor league player trying to fight his way through a season. Field of Dreams reminds us of the power of dreams however crazy they might seem, and reminds us of how profoundly something as simple as a game can have on us. And For Love Of The Game features a major league pitcher at the end of his career, trying to sort out where his life is going. All four of these films count as personal favourites, and capture the essence of the game. 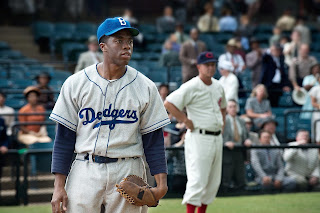 We can add 42 to that list. It tells the story of Robinson (Chadwick Boseman) and Rickey (Harrison Ford), centred mostly on 1946 and 1947. Rickey, an executive with the Dodgers and already a legend in the game, is looking for an ideal candidate to break through the colour barrier that had kept black players out of the majors and in what had been called the Negro League. Robinson is one of those players, trying to get through a segregated world based on bigotry and clear dividing lines. It’s not just a matter of a personal principle for Rickey; he wants talented players on the team, and the colour of their skin doesn’t matter, just how well they can play. So it’s business and principle. Robinson gets signed up, and is told by Rickey that for this to work, for all of the other black players who will come after him, he will have to be stoic enough not to react to the jeers, the insults, the racist taunts that will surely come. 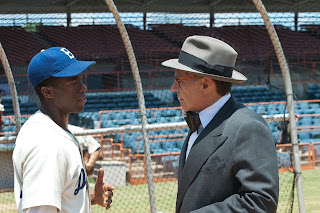 Robinson first spends a season in the affiliate team in Montreal, a dress rehearsal of sorts north of the border, until he is brought to Brooklyn for the 1947 season. He finds himself encountering distrust and prejudice from some of his fellow players, from the fans, and from opposing teams. The racism and bigotry is in full force, and the audience is saturated by the culture of the time. The story is in essence a portrait of this period in time, of Robinson’s moving forward in the face of adversity.
There aren’t really surprises in the film; the story is already well known, but it serves as a reminder of the time, of the intensity of injustice that segregation really was, and it also serves to subtly remind us of how much work is yet to be done. It’s a somber story at times, meant to leave us uncomfortable. The ugliness and poisonous quality of racism, the words and attitudes that go along with that, are on full display here, and they're supposed to make us uncomfortable. 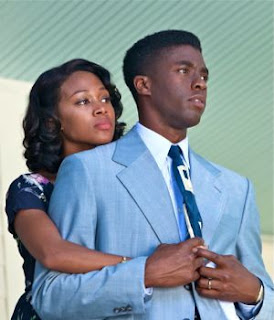 The director, Brian Helgeland, also wrote the screenplay, and comes from that background; his signature work was in the film noir tribute L.A. Confidential, and he brings much of that strength here, with a rich attention to detail. He’s assembled a crew that covers each and every detail, giving us a look back in time, evoking the time- both the good and the bad of the time. And the camera work he oversees is exceptional, particularly in bringing us into the midst of the game. I did think the score, however, was overdone. Mark Isham seemed content to tug at the proverbial heartstrings and went a bit over the top; I’ll have to see how it plays isolated from the movie itself.

The cast itself do their work well. Christopher Meloni briefly plays the Dodgers manager, trying to navigate between this new direction for the team and the distrust of the other players. Nicole Beharie appears as Robinson's wife Rachel, and she gives a sympathetic, warm performance. Lucas Black appears as the Dodgers captain who is among the first to move past initial distrust of Robinson. Character actor John McGinley is the announcer Red Barber, a play by play man who gets some of the best lines in the film. And another character actor, Alan Tudyk (Firefly, Serenity), plays against type, as the racist manager of the Phillies, whose venomous taunts personify all of the bigotry of the era. 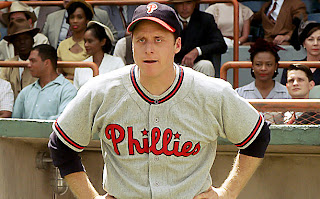 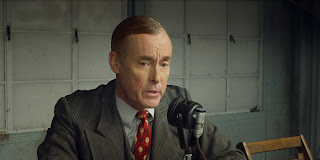 Boseman is a relative newcomer to the field, but that’s all right in this case. Looking at his resume, the only thing I’ve seen him in was an episode of Castle. Using a relative unknown is a wise decision; we don’t associate a well known actor, we’re just looking at the character. Boseman has the gravitas and weight, however, to play the role, conveying the courage, the restraint, and the inner strength of Robinson in the face of hostility. And he also has the body language and manner of a baseball player; a critical element in a film about the game. I look forward to seeing what Boseman does in the future.
Ford pretty much steals the film. He plays Rickey as gruff and scowling, a manager who wants a winning team, but is also fiercely principled. There’s a sense of respect between Rickey and Robinson playing out through the film. The real man came from a strong Methodist background, saw a chance to set things right in the game and went with it. At one point we learn more of the reasons for his point of view, of why he chose to break the colour barrier. It really humanizes the role. He has more than his share of one liners and life lessons, but he’s also a man who loves the game. It’s a terrific performance by Ford, even if it requires wearing body padding to give him the right look. 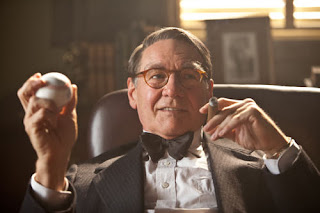 Robinson was a pioneer. In his wake, other black players would follow. Segregation of teams would gradually come to an end as more team managers realized how good the talent out there was. Segregation in the stands would very gradually follow. The Negro League would never be the same, eventually folding. And Robinson would take his place as a giant of the game, his talent and his courage adding to the legacy of the game. If 42 might be familiar to the audience, it’s still a worthy and emotionally uplifting film to take in, a strong character portrait and a look back in time to an era that had an ugly side... but also gave us an example of personal strength and fortitude.
Posted by William Kendall at 6:48 PM