It's Super Bowl weekend. Kansas City versus Tampa Bay. I will not be watching, because frankly I'd rather crawl on my bare hands and knees through broken glass and then pour lemon juice on the cuts than watch football. That said, I do like to skewer it each year. And thus said, here we go. 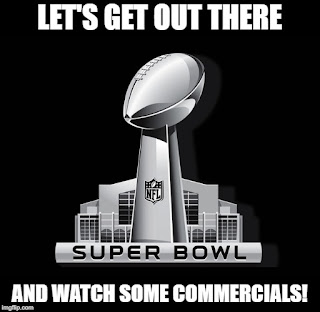 Annual pointless game about to be played; fans delirious; people grounded in reality yawn
Tampa, Florida (AP) The Super Bowl returns in this year of Covid restrictions with limited attendance in the stands. While some have suggested that the NFL should have cancelled the season entirely instead of playing it, including this reporter, that wasn't to be. This reporter, assigned to cover the tedious, pointless game that never seems to end, despite not liking it, has been in Tampa for the last few days, condemned by an editor who hates him, an editor who, it must be pointed out, is the subject of a permanent restraining order forbidding him from being in the same vicinity as this reporter.... (editor: it doesn't mean I can't make your life a living hell, you jackass!)
And so this reporter is assigned to cover an event he doesn't want to cover. This year Tom Brady is back, quarterbacking a new team, the Tampa Bay Buccaneers, who have the odd distinction of playing a Super Bowl at home. Brady, who spent years cheating with his former team, the New England Patriots (editor: Tom Brady is a saint and the most honest guy in the sport! Stop degrading him!) 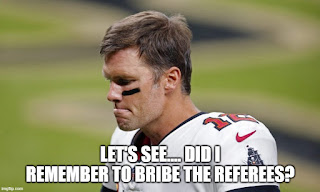 This reporter has been in Tampa during this most unusual year. Raymond James Stadium is the setting for the game this year, but due to Covid, the attendance is to be restricted to 25 000 fans. This in a stadium that has the potential capacity for 75 000 in attendance. But not this year, thanks to Covid. Incidentally, does Covid do requests? Because this reporter has a cranky editor who could really... (editor: oh, I hate you! I hate you so much!!!!)
The Buccaneers are playing the Kansas City Chiefs, who are looking to repeat as champions after winning last year. The game will be broadcast on CBS on Sunday, with 358 hours of pre-game coverage already underway on the network and its associated platforms. Commercials are already being lined up for maximum exposure before being unleashed on Youtube the same day, and this year's halftime show includes the Canadian singer known as The Weeknd. No, that's actually the way he spells it. At least it's not Drake. That guy's an asshole. 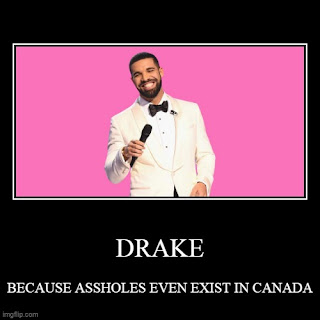 Not everyone is happy about the matchup. Brady's former coach in the Patriots, Bill Belichick, has been fuming all year since the trade. Belichick, who spends his spare time these days making Tom Brady voodoo dolls and bargaining with the Prince of Darkness to give him one more Super Bowl win before he dies, is in Tampa at the moment. The Dark Lord of New England has been seen ranting to anyone who'll listen. "That insufferable ****ing ****er!!!! How dare he **** us over like this! Well he's going to get what's coming to him, believe you me!" 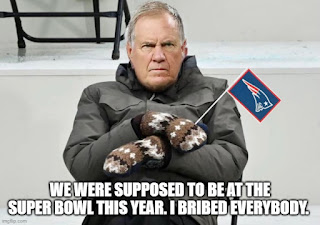 NFL Commissioner Roger Goodell, busy ignoring lawsuits from former players about the damage of concussions, has been busy this week reassuring fans that they have Covid preparations well set up at the stadium. "We've got trained personnel screening everyone, and enough hand sanitizer stored for ten thousand fans to use on their way in." When reminded that 25 000 people are going to be in attendance, Goodell look dumbfounded. "Um.... did I say ten thousand fans? Because I meant ten million. We're bringing in ten million people to watch this game." 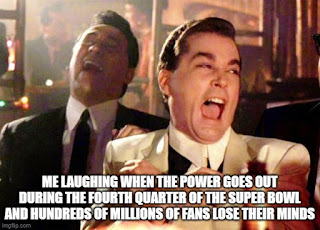 Sure enough, there's a lot of interest in the game from all corners. Millions of people watch this thing for the game, for the commercials, for the halftime show. In the opinion of this reporter, they're all out of their minds for doing so, because it's the dumbest sport in the world, and this is in a world that includes golf (editor: shut up! Football and golf are great sports!). The fact that this reporters' cranky editor likes it proves the point this reporter is making. 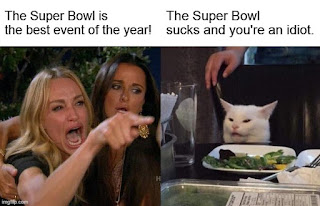 And so for the course of the weekend, the Super Bowl will dominate everything in the world of such people. One could tell them that the world's ending, and they'll say, "not until the game's over!" One could tell them that they've won a million dollars but they have to go collect it right now, and they might say, "can't it wait until after the post game coverage is done?"
This reporter is stuck covering the event, despite the fact that there are plenty of reporters in the sports department at the paper who'd love to attend this. This reporter would point out that the sports department have all taken too many hits to the head (sports department: hey! Um, were you insulting us? What did you say? What day is this?) 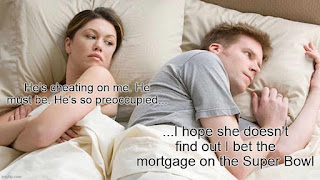 What kind of game will it be? Will Brady be cheating? How will the atmosphere be in a game with a third of the fans? Will the halftime show compensate for it all? Will the game be a superspreader event for Covid? All heady questions, but all things that Goodell is avoiding talking about. Which is to be expected out of Goodell. 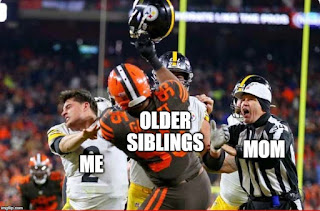 Barred from being anywhere in the state for the game is one of the sport's legends, who later went on to infamy. O. J. Simpson, the murder defendant in the so called Trial Of The Century, who later got convicted on other charges and did a few years in jail, was once upon a time a key player of the game. These days he's on Twitter a lot, trying to pretend he's relevant. This reporter has been threatened by him before. Simpson was barred by the League from turning up at events, but recently held a Zoom press conference from home, where he could be seen sharpening knives in his kitchen.
"It's like this. The ****in' NFL just can't handle the ****in' Juice. They go outta their ****in' way to avoid me, like I'm a ****in' leper or somethin'. Honestly, do I have to ****in' kill someone to get their attention? Because I ****in' will, mother****ers, I ****in' will." 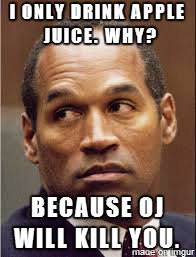 When this reporter, taking part in the Zoom conference, reminded Simpson that he had just incriminated himself in front of reporters, Simpson became livid. "**** you! You're that ****er who keeps tellin' people I was gonna ****in' kill you! Well I'll ****in' kill you for sayin' I'm gonna ****in' kill you, mother****er! I'm gonna **** you up, I swear on the...."
Simpson's feed went offline. It wasn't the only negative story in a week of weirdness. When last seen, Belichick was sitting cross legged on the floor of one of the stadium concourses, breaking the legs of a Tom Brady voodoo doll and muttering, "back stabbing bastard, I'll show him..." 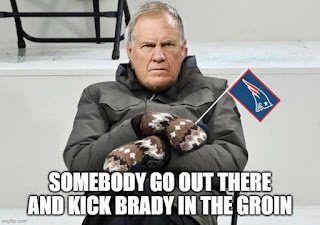 Brady is still the central figure in all this, with speculation that at 43, time is running out. Has he overstayed his welcome? Has he put off retirement for too long? Can he get away with cheating one more time and win another Super Bowl? (editor: hey! What did I tell you about Tom Brady's integrity?) This reporter would point out that his cranky editor doesn't know the meaning of integrity. 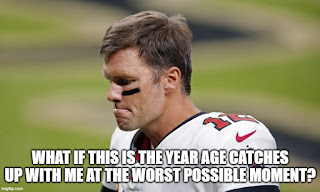 And so it is that Super Bowl weekend has arrived. This reporter is taking all possible Covid precautions, but still expects to come down with the disease, as it appears that the NFL's Covid protocols are being carried out by one guy named Jethro who appears to have a cold and keeps sneezing into his hands (editor: you deserve to die of Covid!)
This reporter would like to say, in closing, that his cranky editor is as much of an asshole as Drake is. 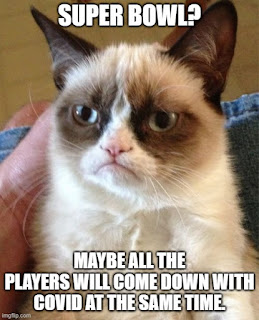 Posted by William Kendall at 10:30 PM