It is time once again for the point of view of the dog and the cat. As always, I start off with the dog, who gets so easily distracted. 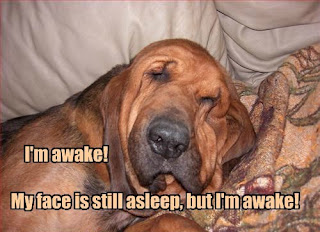 7:04 AM. Waking up at home. Slept exceedingly well. Dreamed of chasing the mailman, the squirrel, and the town mayor up a tree. 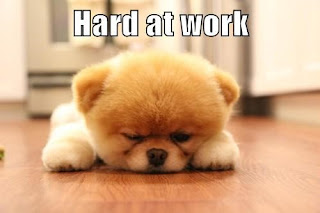 7:08 AM. Looking outside. Still plenty of snow on the ground, and the thermometer’s not going to be going up much today. Still, you can see that the days are getting longer. The sun’s having its effect on things. And eventually spring will show itself. And the best part of spring is splashing around in the mud. 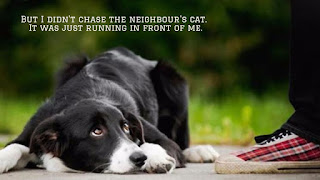 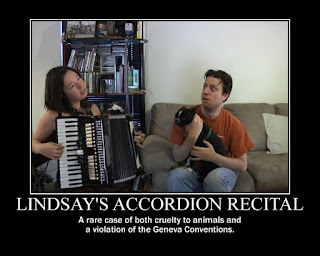 7:11 AM. Waiting on the human to come downstairs. It’s going to be a busy day, after all. Lots of running around out in the snow to do, lots of sniffing to be done, and lots of naps to take. 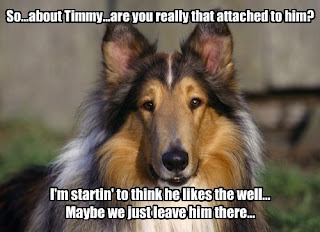 7:13 AM. Observing the birds flying about from feeder to feeder. Every once in awhile that vile squirrel gets into those things, and that’s when I start barking up a storm. Because that’s part of my job. And no squirrel is going to peacefully raid the feeders without my barking loud enough to wake the dead. 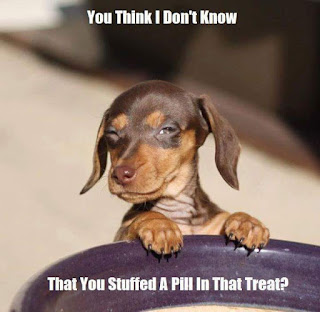 7:17 AM. The human comes downstairs. I start furiously thumping my tail against the floor. Good morning, human! Fine day, isn’t it? Say, have you given any thought to breakfast? Because it’s been very much on my mind. 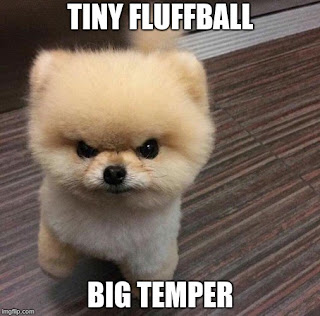 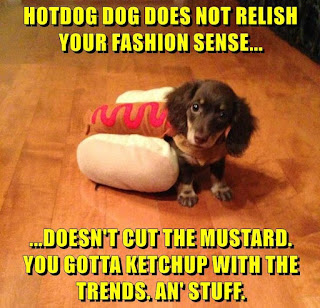 7:20 AM. Licking my chops after polishing off breakfast. That was good! 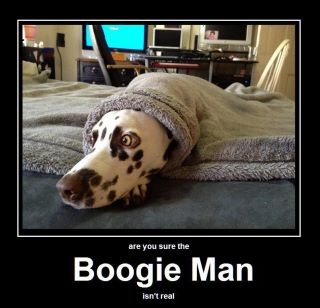 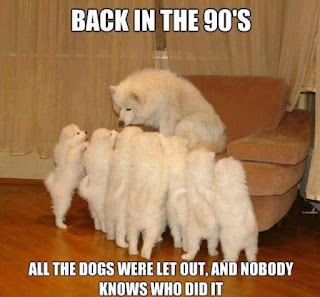 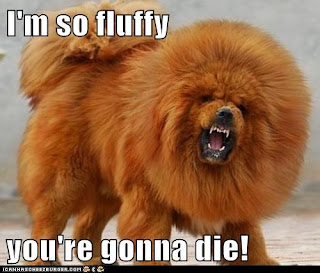 7:28 AM. Running through the back fields, barking my head off, as happy as I can be. 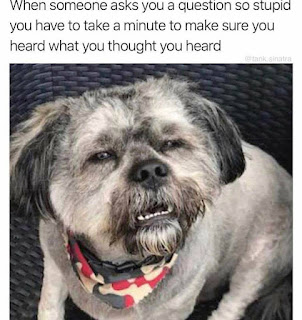 7:36 AM. Stopping in to see Spike the Magnificent, Tormentor of Squirrels. Hey, Spike! 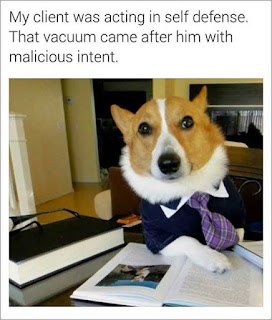 7:37 AM. After customary hound greetings, Spike and I start to discuss matters of the greatest importance. Movements of the squirrels. Punctuality of the mailman. The average speed of a tail wag. 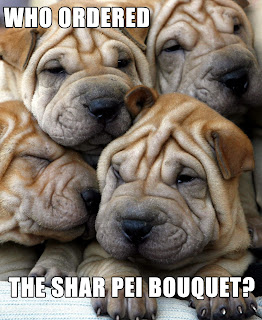 7:42 AM. Spike and I speculate on how long it might really be until spring shows itself. After all, we can still get snowfalls in April. Spike reminds me that at least as long as the snow’s around, we’re not likely to have any skunk encounters. That suits me just fine. I think skunks hate me or something. Getting skunked once, well, that happens, and you learn from it. But I’ve been skunked five times in my life! It’s like they’re out to get me. 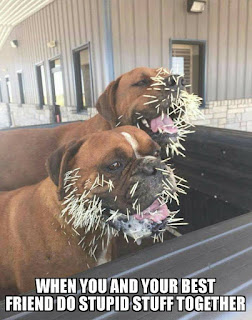 7:45 AM. Spike and I go our separate ways, with Spike promising to bark up a storm when the mailman passes by this afternoon. I always like to have a warning. 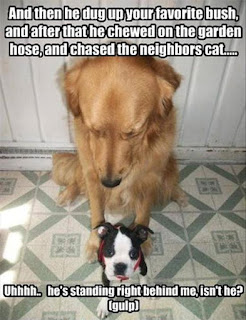 7:56 AM. Walking through the woods, but pausing in my steps when I see movement. It’s that vile squirrel! 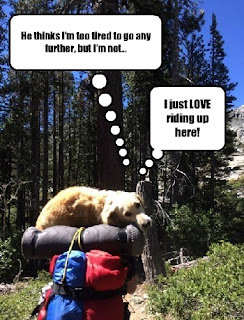 7:57 AM. Slowly advancing on the squirrel. He hasn’t seen me… so close, oh, so close… wait, he’s turning, he sees me… and starts bolting. 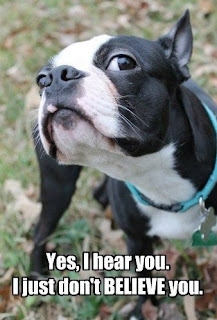 7:58 AM. Barking my head off at the vile squirrel while he sits up in a tree, chattering away at me. He’s laughing at me, the little bastard. Laughing! Oh, this will not do. This will not do at all… 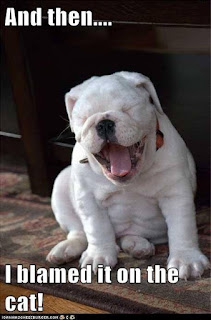 8:02 AM. Pacing around the tree. The squirrel keeps heckling me. I keep fuming. I truly and deeply hate that little bastard. It’s like he knows exactly how to push my buttons. Get down here, you fiend! Right now! 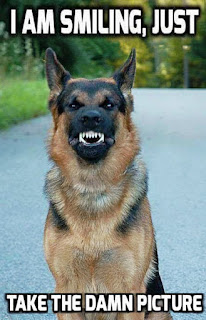 8:19 AM. After much time spent pacing around the tree, I have given up and am now walking away. The squirrel isn’t going to be coming back down anytime soon, and he’s having too much fun laughing at me. Laugh away, you little dirtbag. One day you’re going to slip up. And that’s when I’ll be there. 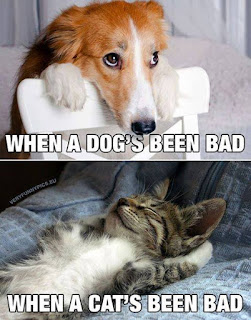 8:31 AM. The human lets me in when I return home. My bad mood must be obvious, because she asks about it. Sufficed to say, human, I hate all squirrels. But especially that one. 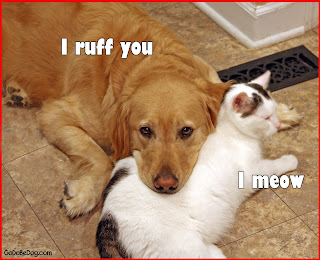 12:05 PM. Using my patented sad eyes look to get the human to give me a ham and cheese sandwich. 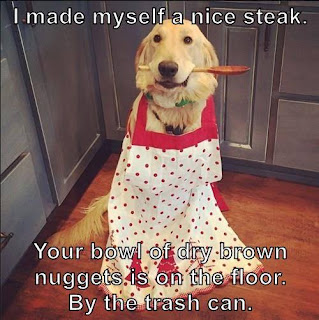 1:32 PM. Barking at the mailman as he drops off mail at the box and drives off. Get lost, you monster! And never come back! 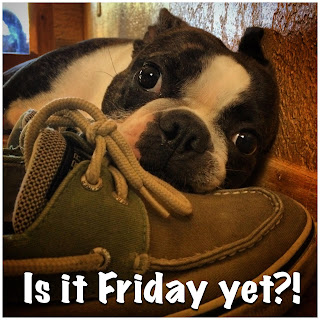 6:38 PM. Dinner with the human. She’s having stew. She’s been kind enough to set out a plate of stewing beef for me. Yum yum yum! 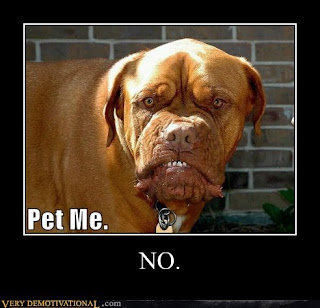 8:24 PM. Lying in the living room, pondering the great mysteries of existence. What is the precise meaning of the belly rub? 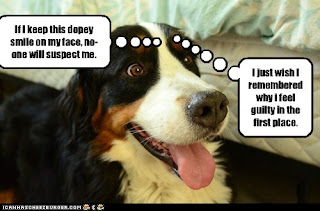 11:33 PM. The human is off to bed. Good night, human, and sleep well. I’ll be down here guarding the house against all intrusions. And I’ll bark up a storm in case the squirrel shows up on one of the windowsills. Just so you know in advance. 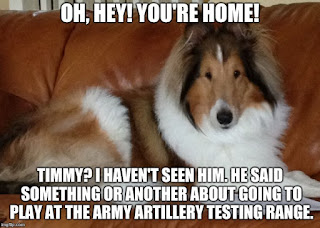 Posted by William Kendall at 2:00 PM