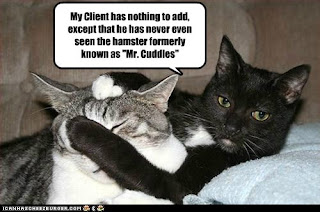 Calgary (CP) What has been described as the Trial Of The Century (the latest of them if you keep track as they pass by) has come to a conclusion in a provincial courthouse in Calgary. Once a famous mystery author and then outed as the alleged most prolific serial killer in history, there is nothing alleged anymore about the defendant. Instead a guilty verdict has been reached in the case of the Crown v Fletcher. Jessica Fletcher has been found guilty on all charges in what may be the first of many trials to come, depending on whether or not prosecutors in other jurisdictions decide to go ahead with cases against her. 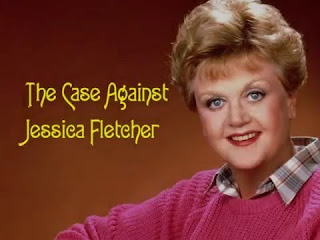 In a dramatic trial that spanned weeks and featured testimony from forensics experts, multiple law enforcement personnel (including the legendary Mountie who finally brought her in), witnesses, and those testifying to the character of the defendant, as well as emotional outbursts from the defendant, the case captivated not only a nation, but the world. Fans of the author, whose decades of writing murder mysteries caught hold with a substantial readership, seem in denial about the verdict, brought down by a jury with two days of deliberation. 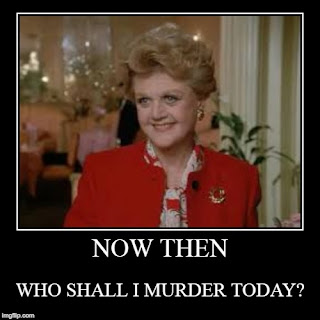 “It just can’t be,” Hugo Cavendish, President of the Free Our Jessica Society told reporters outside the courthouse, tears in his eyes as he absorbed the verdict, along with hundreds of other members of the group, as well as members of the Jessica Fletcher Fan Club.  “Our Jessica is the kindest, most loving grandma figure you could possibly imagine, not an evil serial killer. She’s been framed. Framed, I tell you! So what are we going to do about it?” he called out to his associates.

“Burn down the courthouse!” everyone cried out in unison. 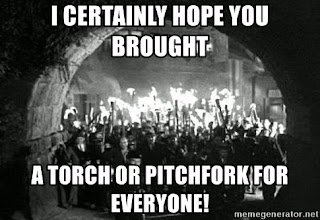 And so with that, hundreds of Fletcherites tried to storm the courthouse, toting pitchforks and torches they’d bought at a pop-up pitchfork and torch stand that had sprung up in the park across the street. Local police, anticipating trouble, pushed them back and broke up the riot, making multiple arrests, including that of Harry Walden, the pitchfork and torch stand operator. While being booked as an accessory to a riot, Walden was heard to say, “All I was doing was identifying a niche market and selling to it. Who needs a permit to do that?” 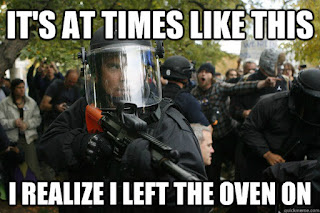 Inside the courthouse, the verdict came down after a high stakes legal duel between the Crown attorney and the defense attorney, Joni Mitchell (not that Joni Mitchell). When the guilty verdict was announced, Jessica Fletcher rose to her feet and started screaming at the jury. The sight of an elderly woman, at first glance looking like the proverbial kindly granny, spouting every curse word under the sun, is still something that takes getting used to. And then she turned into the audience as court security officers closed in on her, and glared at the man who had finally ended her murder spree. 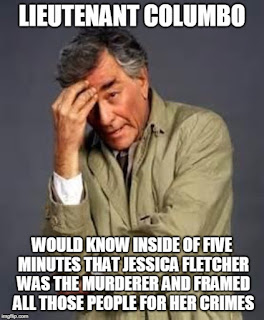 Inspector Lars Ulrich, the cranky but legendary Mountie, testified in the trial about the investigation into the Fletcher case and the larger issues- cases in other jurisdictions, the infamous diary keeping records of thousands of murders, and other elements of the saga. Ulrich seemed to be the focal point for Fletcher’s rage on a regular basis, and it wasn’t any different this time. She focused in on him, and seethed. “I will rip your heart out and eat it while it’s still beating, Ulrich! Do you hear me??? I will have your head on a pike and feast on your bone marrow!” 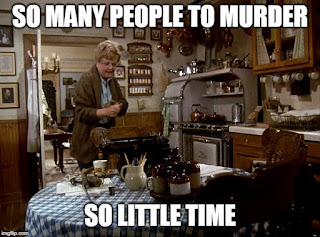 The Inspector, often given to saving the world and knocking out entertainment reporters who mistake him for The Other Lars Ulrich, is not known for smiling. And yet on occasion he does. Such was the case in court, where he smirked at Fletcher and gave her a bit of a wave as she was removed from court, ranting and raging.

Sentencing is scheduled for August. The convicted murderer has been returned to custody where she’s been since her arrest, in a high security facility. The Crown will be pushing hard to have her designated as a dangerous offender for an indefinite sentence, and is otherwise determined to have her sentenced to serve time consecutively on each count.  Joni Mitchell has not yet said what her strategy will be for the sentencing phase. Leaving the courthouse, the young attorney knocked out an entertainment reporter who mistook her for the singer of the same name. 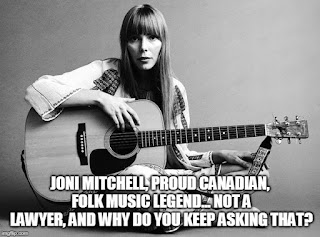 “I don’t understand,” Grady Fletcher, the nephew of the convicted, told reporters outside the courthouse. “I’ve known Aunt Jessica all my life. I still can’t believe that she would have done all the things she’s been accused of. All those people. It just can’t be.” In the opinion of this reporter, it is quite possible that Grady Fletcher might not be the sharpest knife in the block.

The man whose dogged determination ended the killing spree of history’s most prolific serial killer had his own take on things. Inspector Lars Ulrich emerged from court to a flurry of questions from actual reporters, each of whom understood full well that he was not that Lars Ulrich. “Justice has been done,” he said, satisfied with the verdict. When asked if he felt any trepidation about Fletcher’s repeated threats to his life, the Inspector shook his head. “Given what I’ve taken on and taken down on numerous occasions, threats coming from a psychotic mass murdering granny don’t even come close to making me nervous.” 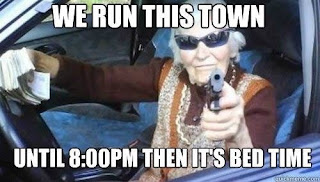 “Lars! Lars!” the voice came from the back of the crowd of reporters. Someone started pushing his way through the crowd. “Skip Blaine, Access Hollywood. Will Metallica have any involvement in the inevitable feature film about the Fletcher case? Like doing the soundtrack?”

Ulrich glared at him as the real reporters gave the Inspector a whole lot of clearance space, getting out of the way and putting distance between themselves and Blaine. “I am not that Lars Ulrich,” he told Blaine in a low, dangerous voice, clenching his fists. 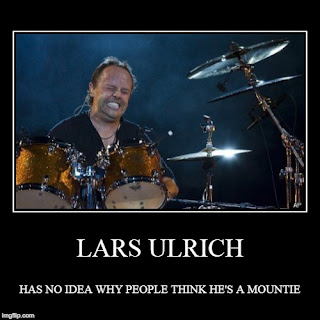 Blaine seemed confused- a frequent issue for entertainment reporters. Then he started laughing. “Oh, Lars, you’re so funny! No, seriously, will you guys be doing the soundtrack?”

Three seconds later Blaine was briefly flying through the air, hit in the nose by a left hook punch from the Inspector. The flight ended with Tanner crashing onto the marble floor twenty feet away from Ulrich, who started forward, his eyes full of purpose and rage. Blaine scrambled away, with the Inspector fast on his heels.

Later reports had it that Blaine ended up in a hospital in Calgary, decked out in a body cast, groaning endlessly for someone to end the agony. “Red serge causes pain!” 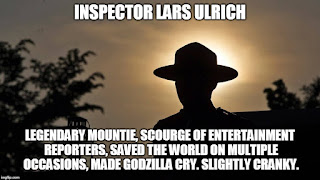 The convicted felon has been reported to be screaming nearly non stop in her cell. Guards are keeping their distance during the rage episodes that are only briefly halted so that Fletcher can take in a breath. And then the screamfests continue again. “Seven hours since we got the old battleaxe back in here after the verdict came down,” one of them told this reporter anonymously. “And she won’t shut up. Keeps screaming about bone marrow and drinking his blood and all that sort of thing. Strictly speaking, as far as I’m concerned, Jessica Fletcher is not exactly the most stable of convicted murderers, if you know what I mean.”

This reporter, hearing the distant yelling, was started by a rather vivid rant down the hall that featured the words “grind his skull to a fine powder and have it in my afternoon tea!” In the opinion of this reporter, Jessica Fletcher is, to put it mildly, batshit crazy. 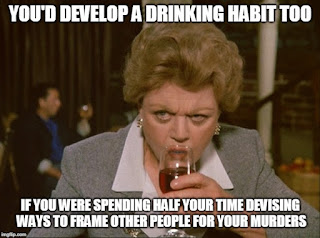