Santa Claus And The Russian Nukes

Los Angeles (AP) Reporters were summoned once more to the offices of Digital Domain this week, the personal playground and headquarters of Michael Bay, a filmmaker who offends the tastes of anyone with anything remotely resembling taste. Real reporters found themselves outnumbered by entertainment reporters, who were busy gushing over whatever sort of announcement might be coming from the man himself. This reporter, doomed by a spiteful editor who (editor: shut up! Don’t even get started with that nonsense! I hate you!) 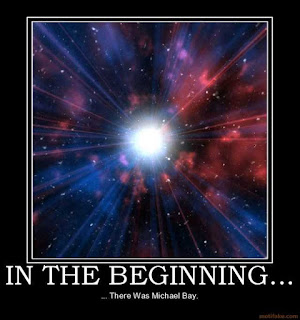 This reporter, sent by an overly cranky overlord who might have gotten their start as an intern at Mount Doom (editor: what did I just tell you?) was among the ranks of the real reporters. Indeed, this reporter was condemned by that previously mentioned cranky overlord to take assignments like this for no other reason, aside from the fact that the cranky overlord hated him with a vengeance. And so there we all were, outnumbered by entertainment reporters, who at their best are very dimwitted, after all.  Everyone was assembled in the facility’s auditorium, where finally a spokeswoman came out onto the stage, where a full length mirror had been installed near the podium. She called for everyone’s attention, and the room quieted down. “Ladies and gentlemen, give a big welcome to the one, the only, the legend... Michael Bay!”

The entertainment reporters broke out into wild applause and cheering. The real reporters looked at their watches and rolled their eyes. The director came out on stage, looking as he usually does- dressed in jeans, a denim shirt, and sports jacket, his hair in its usual dishevelled manner, his face framed with three or four days of beard stubble. And of course the usual vacant eyes and big dumb grin (editor: stop insulting Michael Bay! I love his movies!). 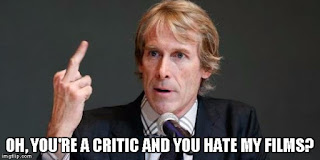 He strode up to the podium, waving as he went, stopping before the mirror to admire himself, and winked at himself. Then he faced the crowd again. “Hello! How wonderful to see you! It’s great that you came to bask in the magnificence that is me!” This reporter rolled his eyes, hearing the collective sighs of other real reporters. Bay, oblivious to reality, continued. “You know, I’m a busy guy, with lots of film projects underway and lots of things to occupy my attention. But I got to thinking, and you know what I’ve never done? Something that’s appropriate for this time of year. A heart warming Christmas holiday classic. Something that will surely take its place as the greatest of all Christmas movies. And so, of course, having had thought of that, I knew I had to make one. Which is what we’re all here to talk about today.”

There was a collective intake of breath from the real reporters, dreading what was to come. A remake of A Christmas Story featuring little Ralphie wanting a nuclear bomb for Christmas? A new version of It’s A Wonderful Life with George Bailey trying to outwit the evil banker turned mad bomber Mr. Potter and save his home town? A desecration of the Nativity story? Meanwhile, the real reporters were already applauding. Bay was grinning like a mad man. Which, for all this reporter knew, he probably was. 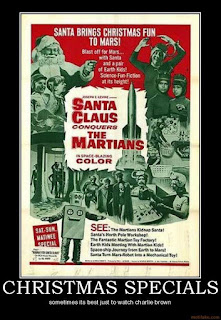 Bay continued to speak. “I thought of an old classic film. Santa Claus Conquers The Martians. Now there are some people out there who think that’s a bad film. Well, you know what? I don’t care what they think. Now I’m not going to remake that. No thanks. I don’t want to touch that classic. But it got me thinking of others who Santa might end up in a fight with. And I decided to use a familiar adversary. So in my Christmas film... it’s going to be Santa Claus against... are you ready for this? Because it’s really really good. Santa Claus versus Mother Russia!”

The real reporters all rolled their eyes collectively; this reporter felt a headache coming along. The entertainment reporters broke out into more wild applause. Bay grinned like the demented idiot that he is. “Thank you! Thank you! You love the idea! How wonderful!” 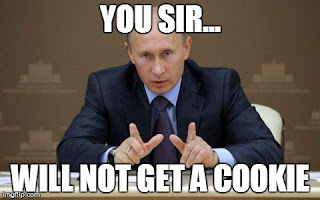 “No, a hot war,” Bay claimed. “Think of it this way, because here’s the premise. A despotic Russian autocrat who looks exactly like Vladimir Putin launches nukes against the world just because he’s pissed off. Maybe it’s that he’s no more than five foot four and has to make up for it by staged photo ops with his shirt off. Maybe he was born pissed off and it just got worse from there. It doesn’t matter. What matters is that the only person in the world who can stop him is the big guy with the magic sleigh and reindeer capable of going tens of thousands of miles an hour. Yes, ladies and gentlemen, Santa Claus. He’s the hero the whole world needs.”

The real reporters were now shaking their heads at the very concept. Bay was  completely oblivious to their disdain. He kept carrying on. “And so without further ado, let me introduce you to the guy playing our St. Nick... and that’s appropriate given his name. My friend, my pal, the one, the only.... give it up for Nicolas Cage!” The actor came out on stage, wearing a Santa suit, except for the fake beard, and drunkenly waving around a bottle of scotch. “Ho ho ho! Have you been good boys and girls this year? Santa Nicky knows if you’ve been bad or good, and I don’t want to put coal in the stockings of anyone who gives me a bad review!”

Cage stumbled over to join Bay, who seemed oblivious to the whole nearly falling over drunk thing the actor was doing. The director just kept talking. “And playing his wife, give it up for an actress I haven’t worked with before but was excited to get to work with this time. She’s a ravishing bombshell you all love, and she’s ideally cast in this role. Ladies and gentlemen, say hello to Pamela Anderson!” 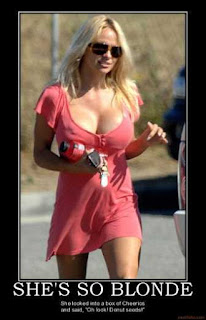 The actress, if one wants to call her that, came out on stage. Never exactly known for her range in the acting department, Anderson was better known for plastic surgery enhanced looks, but a life of hard living has taken its toll on her- she’s not quite the vacant headed bombshell she once was. “Hey there!” she called out, striding over to the others. “Say, Nicky, how about you share some of the scotch?”

Bay was still oblivious. “For the next member of our cast, one of my favourite actors, and I know he’s one of yours. Playing the earnest State Department official and reluctant sidekick to the big man, here he is, the one, the only... Shia LaBeouf!” 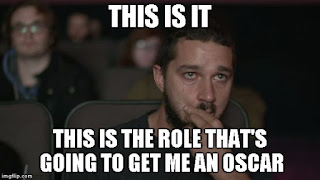 LaBeouf came out on stage, waving. “Hello there! It is good that you have come to see Shia today! Shia is pleased!” He walked over to join his colleagues. Anderson was  busy eying the Scotch. Cage was busy clutching it close.

“And playing our big bad, while I must admit, I wanted to cast someone very short for the role, unfortunately Verne Troyer, who you might remember as Mini Me, isn’t available, what with telling me to go **** myself. And Tom Cruise is just too weird. So I went the other way. Mind you, I’ll be using digital effects to make him look half a foot shorter than he actually is. But this is a guy I’ve never worked with, and I’m sure he’ll be perfect as the Russian president. Even if he’s having problems ditching his British accent. Ladies and gentlemen, say hello to Jason Statham!” 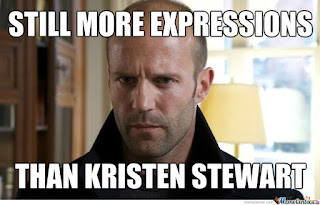 The actor, known for tough guy roles and glaring at the camera, came out on stage, sneering at everyone. “Look, I’m only working for this ******* because I’m gettin’ paid twenty million bucks for the job, all right, guvnor?”

“Shia is only getting ten!” LaBeouf protested.

Bay looked slightly flustered. “We’ll sort all that out later. Ladies and gentlemen, give this wonderful cast a big hand... you’ll be seeing them soon in Santapocalypse Now!” 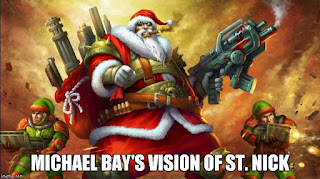 The curtains closed on the director and his actors. The entertainment reporters were busy applauding. There was some racket from back stage, and Anderson screeching. “Give me that Scotch right now, Cage, or I’ll poke your eyes out!”

That was promptly followed by more noise, a shriek, and Cage yelling, “My face! My beautiful face!”

Bay came out from behind the curtains and looked out at everyone. “Say, I don’t mean to pry... but is there by chance a doctor among you? No? Okay. Um... well, would someone please call for an ambulance?”

This reporter sighed in dismay, and walked out with a couple of colleagues. A bottle of Scotch sounded like a good idea right about now, particularly with cranky editors back at the office... (editor: one more word out of you and they’ll never find your body) 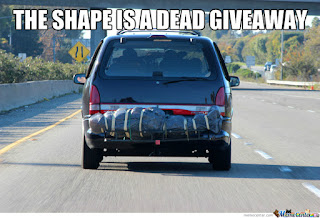 Posted by William Kendall at 7:48 PM