Some people think their ideal Christmas film is something like It's A Wonderful Life or White Christmas. My tastes in Christmas films tend to go in slightly more off kilter directions. Hence this review for what I consider to be a true Christmas classic. 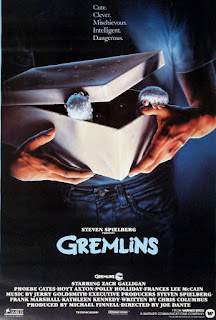 “First of all, keep him out of the light. He hates bright light.
Especially sunlight, it’ll kill him. Second, don’t give him any water, not even to drink. But the most important rule, the rule you can never forget, no matter how much he cries, no matter how much he begs, never feed him after midnight.” ~ the grandson

“You say you hate Washington’s birthday or Thanksgiving and nobody cares, but you say you hate Christmas, and people treat you like you’re a leper.” ~ Kate 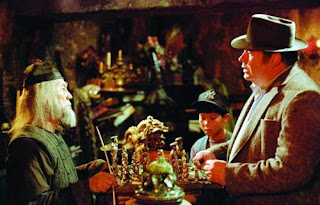 In 1984, director Joe Dante and executive producer Steven Spielberg brought the horror-comedy Gremlins to theatres, a story set at Christmas about a young man getting a curious gift from his parents for Christmas, an impossibly cute creature with three very specific rules and some unlikely consequences. The film sends up the idea of a seemingly postcard perfect town by sending it all into chaos at the hands of demented and vicious creatures. Mixing together dark humour and violence, the film makes for a very different kind of Christmas tradition for those who might roll their eyes at the idea of James Stewart yelling Merry Christmas as he runs down the streets at the end of that other movie we shall not mention. Which of course we have already mentioned, but that’s beside the point. 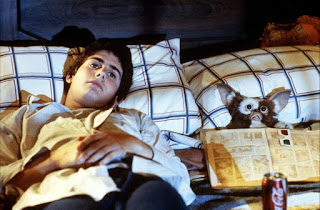 We first meet Randall Peltzer (Hoyt Axton), a friendly inventor of sorts who’s on a business trip. He’s the sort whose inventions have their own inadvertent problems, so as you can imagine, he’s struggling. He visits a Chinatown shop where he comes across something odd- a small creature hidden away in the shadows. Randall thinks it would be an ideal present for his son with Christmas coming. The shop owner refuses to sell him the animal, which he calls a mogwai, though his grandson secretly does sell the animal to the inventor. 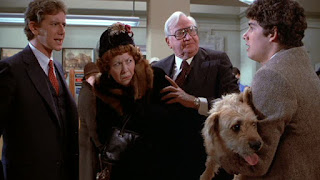 We are then introduced to Randall’s hometown, Kingston Falls, a seemingly picture perfect winter small town straight out of a Capra film, where not all is quite as it first appears. Sure, things are well decorated for Christmas, but there are undertones of trouble- people out of jobs or in precarious employment, and a miserly old bat Capra would have understood. In this mix is Randall’s son Billy (Zach Galligan), who works at the local bank with Kate (Phoebe Cates), with whom he has some mutual chemistry. Randall gives his son the new pet, promptly named Gizmo- but it’s not long before rules start to be broken, and there’s more than one mogwai running about- and that’s before the offspring all start showing their nasty side as gremlins. 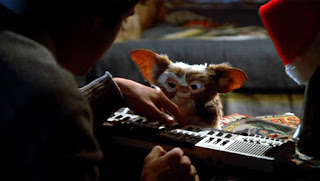 The script is by Chris Columbus, who started out as a screenwriter on projects like this, as well as The Goonies and Young Sherlock Holmes, before moving on to directing- the two Home Alone films were among his works, as were the first two Harry Potter movies. The story weaves its way around dark comedy and horror in an effective way, while playing off ideas such as what might be responsible for mechanical failures or the odd noises you hear in the middle of the night. The story also serves to parody certain old hat features of films- the Capra-esque small town, the cruel rich person, the mysterious Chinese shop with the quiet but wise owner who knows better. Columbus gives us a story and script that moves things along swiftly and never seems to drag. 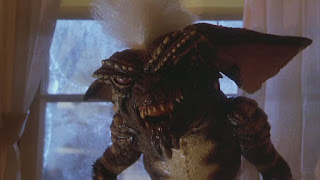 Dante as a choice of director was a good one, having had experience in horror before. He takes things in dark directions at times, and at other times winks at the audience with sly humour in the way he shoots the film. A good portion of the film takes place at night, or in dimly lit spaces- the rule that these creatures don’t care for bright light is inspired, and allows the director to shoot scenes with that in mind. Particularly when things go wrong and all hell breaks loose in town, Dante captures that sense of danger and chaos effectively. Perhaps that’s best shown in a scene set in a community centre swimming pool where he chooses to not show us what’s happening, but let us imagine. We already know, and dread what’s to come, so we don’t have to see it. The twisted humour of Dante’s direction shows itself most strongly in the theatre sequence- where hundreds of cranky gremlins sit enthralled watching the most inappropriate of movies for a movie-in-a-movie sequence- Snow White. 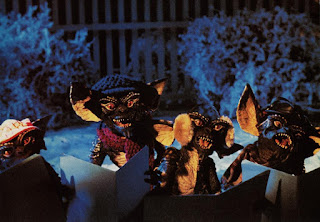 Considering this is all done before special effects had really entered the computer CGI era, the creature work is quite effective, and generally puppet effects are what bring the mogwai- and the gremlins- to life. When we finally see hundreds of gremlins, there’s a lot of variety to their looks as they wreck havoc in the town, gleefully destroying everything in their wake.  Their leader, the gremlin called Stripe, has quite a distinctive look, even in mogwai form, lacking the sheer cuteness of Gizmo, but especially as a gremlin, where he’s vicious, cunning, and malevolent. The two characters- Gizmo and Stripe- are voiced by Howie Mandel and veteran voice actor Frank Welker, which make for very good counterpoints; Mandel gives Gizmo’s voice innocence, while Welker gives Stripe’s vocalizations menace. The score by the great Jerry Goldsmith matches the tone of the movie- gleefully anarchic and mischevious. 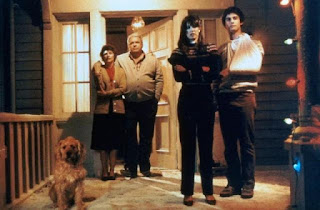 The cast works well all around. Hoyt Axton is one of those character actors you’ve seen in films and television countless times, and he plays Randall as a likable but slightly oblivious man, lacking the wisdom to just leave well enough alone where the mogwai is concerned. Frances Lee McCain plays his wife Lynn, who manages the home, patiently puts up with her husband’s malfunctioning inventions, and comes into her own in dealing with an outbreak of gremlins in her home. Judge Reinhold, who’s made a career out of playing sleazeballs, spends his time as the oily Gerald, a banker colleague of Billy who you wouldn’t trust to take care of anything. And Polly Holliday plays the miserly rich Mrs. Deagle, a drama queen and nasty soul, her performance dripping with contempt, to the point where you’re pleased to see what happens to her. 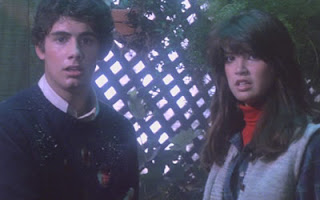 Phoebe Cates is well cast as Kate, likable and generous as a person- to the point where she volunteers shifts at a local bar so the owner doesn’t have to pay an extra waitress. There’s a good chemistry between she and Billy, but there are things that she keeps to herself, particularly the reason why she doesn’t like Christmas. When it’s finally revealed, it sounds like something out of an urban legend. The unknown Zach Galligan was a good choice to play Billy, a thoughtful sort of fellow who’s a bit of a geek at times, a bit laid back, and wide-eyed and perhaps naive. Initially careless, he comes into his own though as the film unfolds and brings chaos into the mix, and Billy proves to rise to the occasion. The two actors work well together, and that certainly comes across through the film. 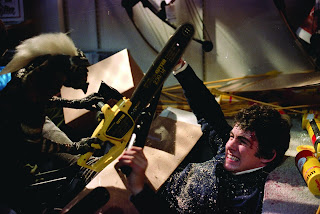 Gremlins spawned a sequel, which tended to break through the fourth wall in unleashing the creatures in New York City, and there is talk of another follow up film. The first is quite a classic, tearing its way through the very idea of a traditional Christmas film with a mix of violent horror and gleefully demented humour. This is my idea of a fun Christmas film. 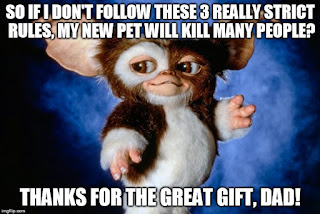 Posted by William Kendall at 7:27 PM