The Downfall Of A Fugitive 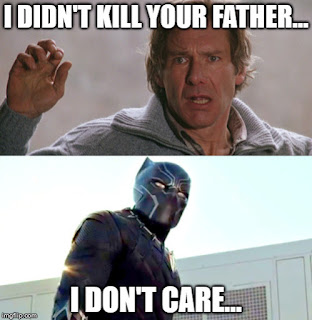 World's Most Notorious Fugitive Captured, World Breathes Sigh Of Relief
Calgary (CP). The long nightmare is over. People across North America and around the world feel a bit safer tonight. A feared fugitive who escaped from custody several weeks ago was successfully brought to justice and captured, returning to incarceration in the maximum security Stormhaven Women's Prison outside Calgary, Alberta on the weekend.
We refer, of course, to the one time murder mystery novelist and world's most prolific serial killer, Jessica Fletcher. 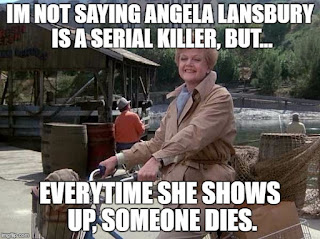 Fletcher, a longtime resident of Cabot Cove, Maine, often called the murder capital of the world for an average of twelve murders a year in a village of some three thousand people, was arrested for a series of murders in Canada and put on trial. In the wake of her arrests, secret journals were recovered from her home boasting of committing thousands of murders, often framing an innocent person for the crime. To this date law enforcement in multiple jurisdictions across the world continue to come to grips with her involvement in crimes. The true number of victims killed by Fletcher may never truly be known. 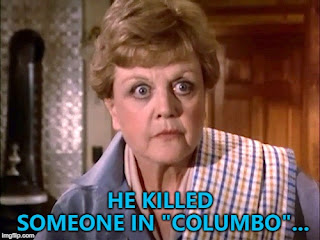 Fletcher escaped prison in late September, killing 47 people in a daring escape and fleeing into the Alberta countryside. In the weeks that followed, another 112 more people were murdered, some on camera, others witnessed by third parties. Some crimes were thought to be spur of the moment, others involved methodical uses of torture or poison. All appear to have been caused by Fletcher, who from time to time would make brief calls to local radio stations, boasting of her crimes.
"I just don't understand," Grady Fletcher, the dimwitted nephew of the murderer said when reached at home in Cabot Cove, where he's writing his memoirs, titled She Wasn't That Bad: Life With My Aunt. "Aunt Jessica was always such a nice lady. I know what they're saying about her, and even though I've personally seen her go ballistic in court, I still can't believe she'd do all that." 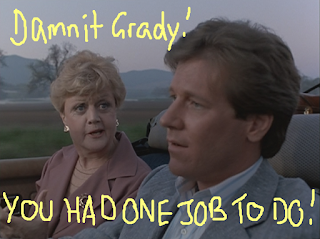 Fletcher was known in her brief calls to make taunting remarks towards the lawman who brought her down in the first place, the legendary Mountie Inspector Lars Ulrich, the world's crankiest lawman. She had been fixated on him during the trial, making multiple threats all throughout the proceedings involving his graphic torture and death, and cannibalizing him. She would repeat some of the same before hanging up on radio hosts, vowing bloody revenge against the man she blamed for ending her reign of terror. 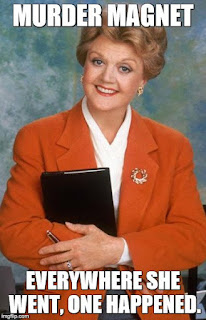 Or at least putting it on hold. As mentioned, 112 people on either side of the Alberta- British Columbia border were murdered, an astonishing death rate for a killer whose average kills in a year fluctuated. Other bodies might yet be found. Authorities all along the western border in the United States were watchful, wondering if the infamous serial killer might try to get back into her homeland.
In the end, the worry was all for nothing, as she never made it to the American border. 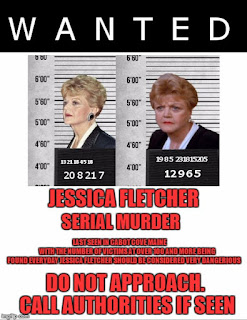 A spokesperson for Alberta's minister of justice spoke with reporters on Sunday, confirming that the arrest had been made. "Mrs. Fletcher was brought back into custody on Sunday afternoon," Kelly Landon told reporters. "She was brought back to Stormhaven after being arrested by the very lawman she wanted to settle scores with. Inspector Lars Ulrich of the Royal Canadian Mounted Police."
The world's crankiest lawman was not available for comment, but Landon went into detail about the thrilling end of the manhunt for the serial killer, which took place in a place well known to the lawman, and one fitting for the subject of the murderer's choice of writing genre: Tombstone Canyon in the Rockies. 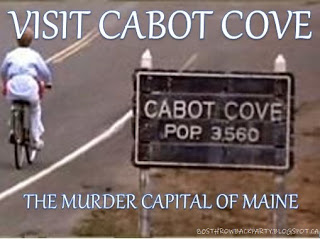 It was there, in a place where Ulrich has often been known to chase down entertainment reporters mistaking him for the other Lars Ulrich, that the two adversaries had a confrontation on a footbridge spamming the chasm. It ended with Fletcher trying to destroy the bridge in an attempt to take Ulrich to his death with her, but was thwarted by Ulrich successfully knocking her out and disarming the explosives she had planted.
"That's just the sort of thing the Inspector would do," one of the Mounties at his detachment in the Alberta foothills said. "Sure, it might have been tempting to end her right then and there. But we Mounties always get our man. Or woman in this case." 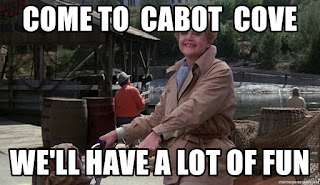 Ulrich cuffed Fletcher and delivered her to Stormhaven, where she was taken into custody and put in an improved cell on 24 hour watch. At last report she was heard screaming bloody murder in a 12 hour long temper tantrum, and vowing to eat Ulrich's heart while it was still beating.
The world at large is somewhat better at ease today now that the world's most dangerous fugitive has been brought back into custody. The world's greatest and grouchiest lawman has once again come through. 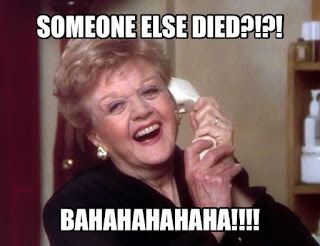 Elsewhere, at Menard Correctional Centre in Illinois, a convict who has been incarcerated since 1994 is trying to gain freedom by suggesting Fletcher is responsible for his crimes. Frederick Sykes, a former police officer, ex-corporate security specialist, and one armed man jailed for three murders and other various crimes, insists he was framed, despite the case being deemed air-tight by prosecutors. "Jessica Fletcher wasn't near Chicago during the times of the murders Sykes and his accomplice were convicted for," Chicago Deputy District Attorney Alan Winninger insisted. "She was killing three people in Seattle on the night of the first murder, framing one person in London on the night of the second murder, and killing another person in Cabot Cove on the night of the last murder. Frederick Sykes and Charles Nichols framed Doctor Richard Kimble, an innocent man, for a murder they committed. For which we've been really, really sorry for for a long time."
Sykes remains defiant. "Look at me! I'm a one armed man! Isn't that enough to get me a bit of sympathy? Who could I possibly have bludgeoned and shot with my one good hand?" 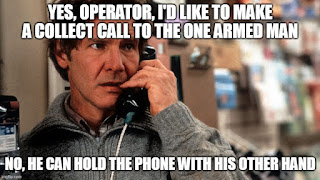