And The Guns Have Fallen Silent 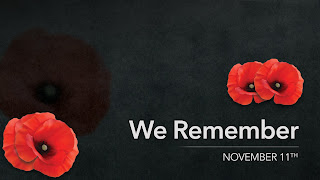 The guns across Europe fell silent at the eleventh hour of November 11th, 1917. The Great War, supposedly the war to end all wars, came to an end. The occasion is marked in Canada as Remembrance Day, a day to commemorate the dead of war and honour the veterans who survived. Other places mark it as Veterans Day or Armistice Day. Ceremonies are held in big cities and small villages. Wreaths are laid at memorials. Prayers are offered up. The Last Post is played. And people remember.
The following are monuments and memorials taken by me over the last year at various times in Ottawa and published on my photoblog.
This first one is the National Aboriginal Veterans Monument, set in Confederation Park and taken on a winter day. It features four figures of Indigenous backgrounds, mounted among animals: the wolf, the bear, the bison, the elk, and the eagle at the top. 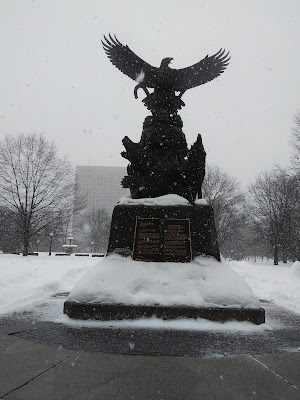 In the same park are other war memorials, and here are two, the oldest and the newest. The South African War Memorial was erected by locals to commemorate the Boer War of 1899-1902, in which Canadians took part. The Animals In War Memorial was erected several years ago, and includes three plaques telling the story of animal service in war, as well as a life sized sculpture of a dog. 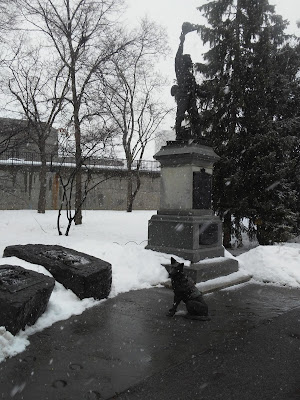 This spring view was taken on Green Island in Ottawa, where the Rideau River meets the Ottawa River. There are several military monuments here, including this one. The Canadian doctor, soldier, and poet John McCrae is known to the world for his poem In Flanders Fields. He served in the South African War and the Great War, and died in France. This is one of two statues of McCrae; its double lies in his home town of Guelph, Ontario. 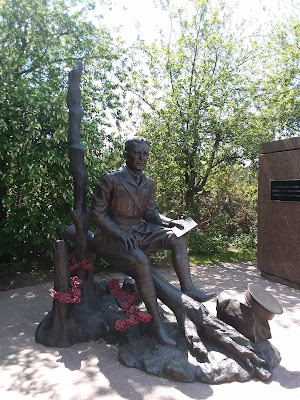 The Canadian War Museum tells the story of Canada's military history at home and abroad. Among its most haunting set of artifacts are the half scale plaster casts created by Walter Allward, who designed and oversaw the building of the monumental Canadian National Vimy Memorial in France. Canadian soldiers won an astonishing victory at the Battle of Vimy Ridge during the First World War, and Allward's sculptures done in preparation for the work have their home here. They are allegorical in nature, and deeply mournful, entirely appropriate of the Memorial itself. 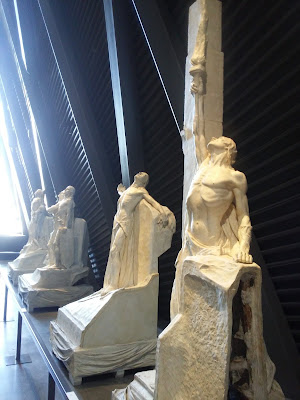 The national service of remembrance is held at the National War Memorial, built first to commemorate the dead of the First World War and dedicated in 1939. It has since been dedicated in memory of the dead of all wars and military service for the country. 22 figures march forward through an arch, which is topped by two allegorical figures. This dramatic night view was taken in the winter. 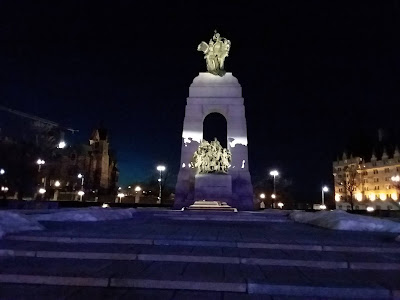 While this was taken in spring. Those actively serving in the military stand post as guards at the base each day, two per hour, at the Tomb Of The Unknown Soldier, from each branch of the military. 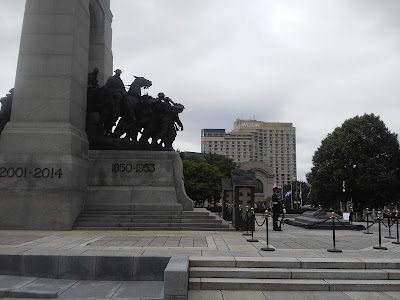 This is the last resting place of a Canadian soldier who fell at Vimy Ridge, and was placed here in 2000. At the time I took this shot, it was around the time of VE Day. 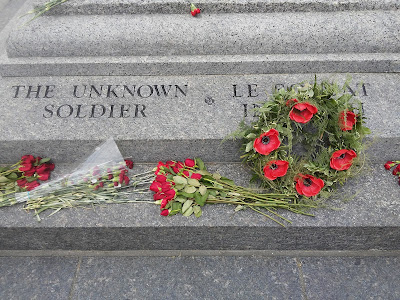 And I finish with a shot of it taken not so long after, but on a brighter day, with tulips in the foreground. 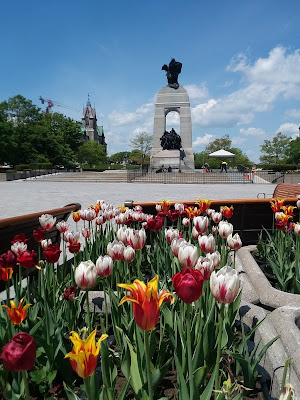