Curse Of The Spell Caster Spammers 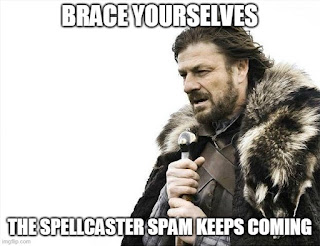 They will never learn to just go away. They can't take a hint and just drop dead. As much as we'd all like that to happen. I speak of course of the vile internet spammers and scammers. That wretched lot who just keep leaving the same irrelevant comments on blogs, send us emails promising riches or a better life... all while providing none of that to the poor suckers who actually take them up on it. Some weeks back I posted about a comment from a spell caster spam (likely written by the very same spell caster (or, let's face it, the con artist passing himself off as a spell caster, because that's the truth). On that very post, in the days that followed, I got numerous spam comments that quickly ended up in the purgatory of spam folders. I decided to preserve three of them here, for the purposes of ridiculing the morons who actually write this crap. 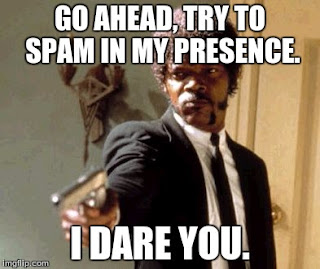 I want to inform you all that there is a spell caster that is genuine and real.I never really believed in any of these things but when I was losing My Ex I needed help and somewhere to turn badly. I found consultant isong SPELLS and i ordered a LOVE SPELL. Several days later my phone rang My Ex was in his old self again and wanted to come back to me! Not only come back,the spell caster opened him up to how much I loved and needed him.this Spell Casting isn't brainwashing, but they opened his eyes to how much we have to share together for the rest of our life.I recommend you if you are in my old situation to try it.It will bring you a wonderful surprises as well as your lover back to you.And can also help you get pregnant
I'm so very grateful to Dr oluba, for bringing my husband who left me for another woman, that moment my husband Left me I thought I lost everything until a friend of my gave me Dr oluba, WhatsApp contact, I messaged him and told him the pain I was going through so he told me that everything was going to be fine that if I have the faith and believe in him that the spell will surely work for me and my husband will surely come back home and he told me what to do, so those things were done and 24 hrs later my husband came back home begging for my forgiveness, am so happy and grateful to Dr oluba, if you need his help email him
My wife was flirting with another man. until she vanished away, I was desperate to get her back, I wasted so much time and money trying to get my wife back, I tried almost all possibilities to have her back and nothing worked. I became lonely. To make it short, I found a spell caster, Dr love. I saw the good testimonies about his wonderful work and after reading the Testimonials, I decided I had to try and give it one last try and After the spells, a miracle happened, my wife came home. It was awesome, anyone who needs help, should email him 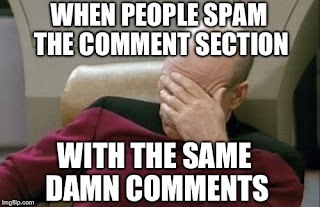 Yes, numerous comments just like those. And no doubt this post will attract more of them. You call out these people for what they are and it's like moths to a source of light. They spin the tale of the lover lost and how their esteemed spellcaster (who's a doctor of what, precisely? Because just calling yourself a doctor doesn't make you one) set their life back right.
There are the usual tell tales of spam comments. Capitalized words that don't need it. Spacing issues. The same form letter format with names changed here and there, but let's face it, these all pretty much read the same way. 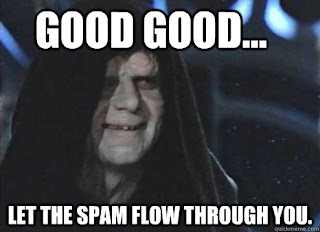 Our first spammer claims that 'it will bring you a wonderful surprises as well as your lover back to you. And can help you get pregnant.' Wow. First, that's some potent spell casting from your totally fake spell caster. Second, I can't get pregnant. I'm a man. And third: I hate kids. Hate 'em, hate 'em, hate 'em, can't stand 'em. Why would I want to have one?
Our second spammer, incidentally, has the worst photoshopped image for her profile. A head on a neck that doesn't feel right. And... how do I put this delicately? A large bust size. Very large. Spilling out of the shirt size. She's repeatedly spammed the same comment over and over again about Dr Oluba (note to spammer, if you're going to abbreviate doctor, than you should write it as Dr.. Otherwise you're not going to be taken seriously. As if you ever were.) 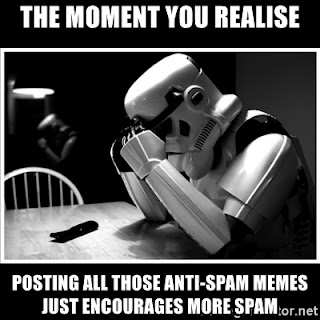 And our third claims to be a man (again, these are bot comments written by the same bot factory of spell caster spammers. Spammers are not, strictly speaking, human beings). He tells us his wife was flirting with another man. He says "until she vanished away, I was desperate to get her back"... well, wait a minute. That comma shouldn't be there. Because if it's there, it makes the sentence read that you were desperate to get her back until she vanished away. See what it means? If this was legitimate (which it's not), when she 'vanished away' (which, again, is not the way a real person speaks), you weren't all that desperate to get her back.
And he comes up with the dumbest of names for his spell caster. Dr Love. Uh huh. Sure, that sounds legitimate. 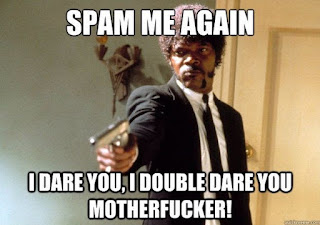 As said earlier, I imagine this very post will attract more of the spell caster spam. Some may be briefly published before I send them to the hellscape of the spam comments folder. They won't get the point that I'm making here, which I'll sum up with to each of them.
Ready, spell caster fans? I'm talking to you.
Here's what I have to say. Listen closely. 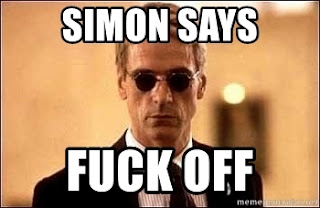 Go fuck yourselves.
I don't care less about your totally fake fucking con artist spell casting doctor.
All of you should do the universe a favour and throw yourselves off a cliff.
Do you understand me now?
In short: fuck off. 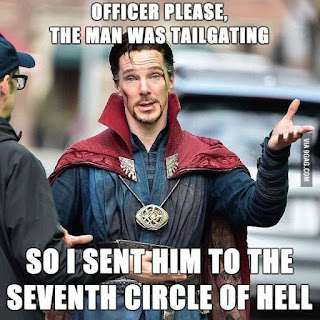