A Dark And Confusing Fate 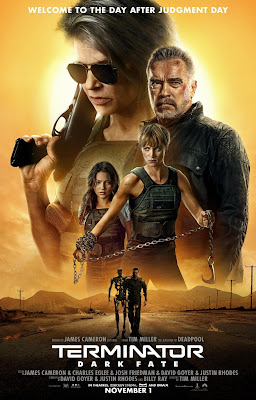 “Two days ago, I had this nice, simple life. And now it’s a nightmare.” ~ Dani Ramos

“Come with me or you’ll be dead in thirty seconds.” ~ Grace 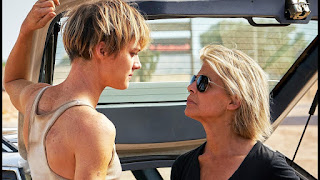 The Terminator franchise has returned to theatres with Terminator: Dark Fate, the sixth in the series and seventh if you include the television series The Sarah Connor Chronicles. It’s deemed a direct sequel to Terminator 2, as everything that’s come after that is now deemed as happening in alternate timelines. Confused yet? You will be. The film reunites Linda Hamilton and Arnold Schwarzenegger, gives us a healthy dose of girl power along the way, brings up the latest in a long line of cybernetic terminator baddies, and even brings back original director James Cameron as a producer. All this under the direction of Tim Miller (Deadpool). 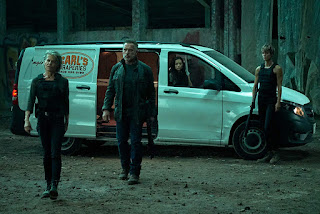 The film opens with a flashback to 1998, years after the events of T2 and the aversion of the end of life as we know it by Sarah Connor (Hamilton), her son John, and a rogue T-800. Sarah and John are living a quiet life, but Skynet sent back more than one Terminator through time before getting annihilated, and one of them, a T-800 (Schwarzenegger), catches up to them. Twenty two years later, another Terminator, designated the Rev-9 (Gabriel Luna), comes back in time to murder Dani Ramos (Natalia Reyes). As before, a protector from the future comes back to defend her. Grace (Mackenzie Davis) is a cybernetic enhanced soldier from 2042, taken in by the adult Dani, a commander of the human Resistance. It’s not long before Grace and Dani come face to face with an older but no less formidable Sarah Connor, and then that same T-800, who has developed a conscience, integrated into society, given himself a name, and even aged. 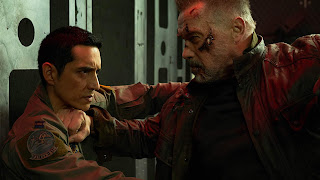 The Terminator franchise as a whole is a paradox- people from the future coming back into the past to prevent the inevitable. Can timelines be changed? Or as is the case, do multiple timelines spring out of a single moment? It’s a headache when you try to sort out what happened to who in which timeline, and this adds onto the headache. Skynet’s been destroyed, but that doesn’t mean threats from the future are done. This film gives us another AI called Legion, still sending its machines back in time to do its dirty work and stack the deck in its war against humanity. The film rose out of some disappointment in the recent Genisys chapter of the franchise. Producer David Ellison asked Cameron to come back on board in the same role, and recruited Miller as a director. The story chooses to retcon the three sequels that have come since T2 into alternate timelines, and acts instead as a follow up to that film. Multiple writers are involved in this, some with ties to the franchise. 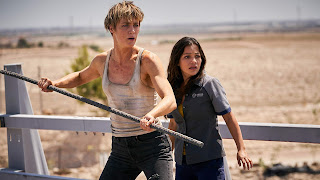 The story starts out creatively, with a shock for the audience. From there it weaves the convoluted paradoxes of time travel and science fiction with good characterization. We see character growth in more than one way, which I liked. It starts with an antagonist who has more personality than others of his kind before. It carries on to a young girl who has no idea what destiny has in store for her when her world comes apart. And it continues to a warrior from the future who is part human and part machine and must reconcile that. Some of the strongest characterization comes from the two leads- a robotic assassin from the future without a purpose who experiences personal growth by having free will and developing a conscience, and a fierce woman who’s suffered tremendous losses and must find her way back to her own humanity. That sense of depth among these characters is a great asset to the film. 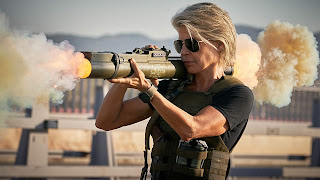 Miller has already proven with the first Deadpool movie that he could handle action, and that continues here. There’s more than a fair share of action set pieces in this film, with violence and mayhem and futuristic nightmares come to life. Miller doesn’t get lost in that, which is another good thing. The new angle on the Terminator antagonist Rev-9 and his shifting abilities is rendered well, with the CGI believable. But the CGI serves the story, as opposed to the other way around, a distinction that would be lost on some directors. As the story goes long, it weaves between the themes of hope and despair, redemption and revenge, and the inevitability of what is to come. All while the audience still tries to figure out how convoluted all of that time travel can be. 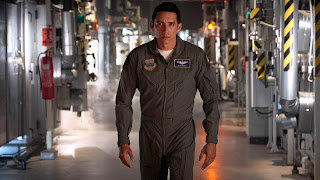 As I’ve mentioned, it’s the characters who ground the film, and serve as the strongest asset of the film. Gabriel Luna steps in as the latest Terminator antagonist, the Rev-9. I’ve only seen him before in the series Agents of S.H.I.E.L.D. as the Ghost Rider. Unlike those who have come before him, the Rev-9 is programmed with more of a personality- this being an asset in infiltration. Rev-9 appears in more than one way, proves to be a formidable adversary, and Luna makes the most of the part, exuding a cold sort of charm that conceals the lethal weapon just lingering under the surface. 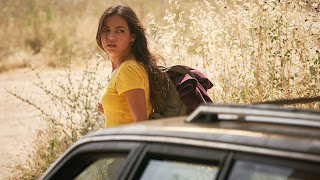 Natalia Reyes has a sympathetic role as Dani Ramos, whose world is shattered with the deaths of her family, an attempt on her life, and the revelation that she is meant for greater things in a dark world of war against machines. She rises to the occasion as events go along- not unlike Sarah Connor in the first of the films. Starting as a young woman just getting through her day, she becomes more as the film goes along, and the actress plays to that in a strong way. 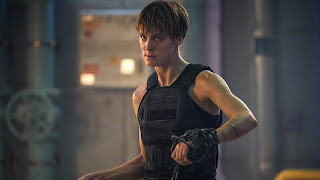 Mackenzie Davis has an eclectic resume that includes the recent Blade Runner 2049, and here she gets a lot to do as the warrior from the future sent back to thwart a cybernetic adversary. Grace exists on the edge between human and machine, enhanced with cybernetics to save her life, and able to go toe to toe with a terminator. There’s tension between her and Sarah- understandable, as Sarah distrusts her machine aspects and views her as inexperienced. And interestingly, there’s more of a common bond she has with Schwarzenegger’s T-800, something the actress plays to through the film. 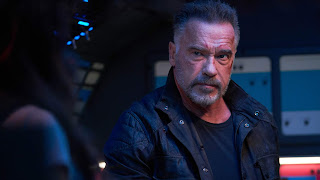 Schwarzenegger himself has been playing this role for awhile (well, several different T-800s, to be precise). But this is something of a new take on the character. In the first film we’ve seen a merciless killer, programmed to come back in time and kill the mother of the leader of the Resistance. In subsequent films we’ve seen a reprogrammed terminator who’s been programmed by others to protect. Here we have a terminator who comes back in time to carry out his programming… and then finds himself cut adrift and in possession of free will. It’s of his own free will that he develops a conscience, comes to terms with the consequences of his actions, learns to be better, and integrates himself into human society, even taking a name. This new take is an intriguing one, as is the tension that exists between he and Sarah, as he knows those consequences are going to catch up with him sooner or later. 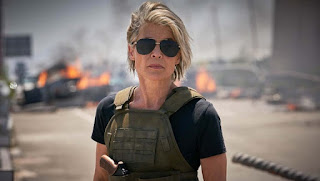 It's Linda Hamilton who really owns the film as Sarah Connor. She’s older than when we last saw her, more bitter, angrier, more cynical, but still as fierce a survivor as ever. She has reason to be bitter, and yet still we sympathize with her. We understand what drives her to do what she does. Sarah has spent years on the run, wanted by the law, but has spent that time hunting terminators of one variety or another sent back in time. It’s what she’s had to live for, and her journey through this film is one of coming back to the world, letting herself feel human again, to start to trust- even those she would have reason not to.  Hamilton’s performance is compelling to watch, once again, and is worth the price of admission alone. 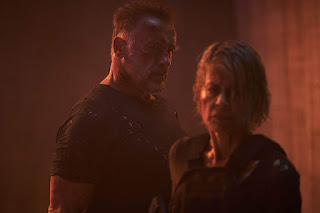 I do think that this franchise should have stopped with the third film, Rise Of The Machines. It made sense, even with a bittersweet, dark ending, for the narrative to end there. Subsequent films, including this one, have made the timeline so convoluted that it gives you a headache just trying to figure it all out. And yet taken on its own merits, Dark Fate works better than Genisys, which was nonsensical. Its actors are its best strength, and that really shows itself in how the characters progress as the story goes along. 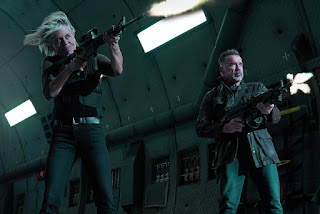